We find ourselves at a pivotal moment in this project’s short history where the economics of our system have been stressed too far. Our Treasury budget has collapsed to the point where, if we fail to take critical actions, we cannot achieve the key strategic objectives that give Horizen value. In coordination with deep team cuts and project scope reductions that have been ongoing for some time, we propose increasing the Treasury pool to 20% of block rewards.

It’s no surprise that the entire crypto industry has been having a terrible 2018, at least from the market side of things. Both total crypto market capitalization and ZEN market cap are down about 90% from the start of the year. 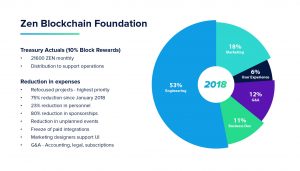 While the sky looks to be falling, we’ve made tremendous leaps forward in terms of infrastructure, usability, and laying the groundwork for real adoption across use cases. We also have an exciting pipeline of products, innovations, and partnerships for this coming quarter.

Reality is hard to escape, as badly as we want to close our eyes and pretend things are different. The magnitude and duration of the crash are worse than expected. The thing is, you generally don’t plan budgets and projects to the tail of an outcome distribution, even if you think it has a negative skew.

The last few months have been rough for the Horizen team as we’re on our fourth round of cuts. We’ve slashed contracts, events, sponsorships, all the low hanging fruit, then started getting into laying off team members. This is always the hardest thing for any organization, especially when you’ve spent so much time finding and maturing that talent. 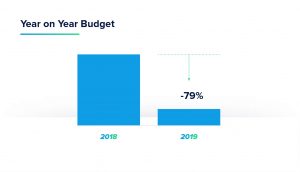 In total, this last round of cuts drops expenses about 80%-90% of where we were at the beginning of the year, which is finally in line with the price drop. It’s not enough!

Now we’re at a point where we can remove critical scope from product and engineering, basically scrap, or put on ice, many of the core innovations that make us unique, or we find alternatives. The alternative that makes the most sense right now is to double the Treasury payout to 20% of block rewards.

In the tradeoff between the equivalent of closing shop or boosting Treasury payouts, I think it a no-brainer to shift 10% of block rewards into Treasury. This is a decision that we propose after deep thought, initially rejecting the idea, but even just these last two weeks we’ve lost half our market value. We need to take radical action to preserve the very basics of this project.

We propose a 10% shift from the mining pool to Treasury knowing full well that this reduces mining income about 14% zen-on-zen, and we expect miners to shift resources accordingly. Current nethash in combination with our delayed block penalty mechanism make this the only feasible tradeoff.

The ideal scenario would be to wait for the Treasury DAO voting system, but even that has been delayed with the inability to scale our engineering team fast enough. We have to act decisively now. When the voting system is in place, the community and stakeholders can reverse or adjust to whatever makes sense at that time.

Preserving the bare minimum team to accomplish our key strategic objectives is absolutely necessary. We’ve built a powerful community, an extremely motivated and competent team (many of which have chosen to remain on as volunteers), and a vision that solves real-world problems in a meaningful way. No matter how scary things might look right now, together we succeed against all odds.

QWhy take it from mining reward only? Are you not worried this will drive more miners away ?

We calculate it will drive away about 15% of the miners and the hashrate will balance out. It decreases the protection against a hashrate majority attack from a single miner, but the 51% attack code protection that is already in place should defend against that type of attack. A bigger threat currently is not having the funding to continue the work on the project at an acceptable pace and to not be able to keep the technical team together that we have built in the last year.

QAt this point, I agree. But will it be enough for you guys to survive? You know what they say. Markets can stay irrational longer than we can remain solvent 🙂 Cut the marketing costs, focus on engineering ONLY. This can last for maybe another year? What then?

It is an idea to cut the marketing costs, but we are going for a more balanced approach. One of the goals of the Horizen project is to build products that people actually use, then improve the products from their use in the field. A difficult thing to do with a cryptocurrency is to communicate the use case and build ecosystems of actual users, and in some cases, we need to cast a broad net across many countries and communities to find out where the systems we are building are getting the most traction.

Determining where we are developing a user ecosystem then putting more resources into expanding that ecosystem are done by marketing. Marketing is much more than social media and a simple trumpeting of accomplishments..

Q100% supportive. Question: where is the additional 10% funded from? Miners/ Nodes/ both?

QWhen is the change to miner’s share of the block reward taking place?

QIs this increase to 20% only a temporary measure? Will the treasury return to 10% after the market recovers?

Not ready to commit to an answer on this. This whole year has been surprising to many people and who knows what next year will bring.

QIf the bear market continues a further 1-2 year, will Horizen be able to survive? For how many years do the reserve last?

There are no reserves. Our initial reserves slowly spent after market conditions dropped for an extended period of time. All the funds are allocated to development, initiating high-level partnerships, exchange placements, and especially funding world-class cryptocurrency research, modeling, and development for sidechains, a voting system for governance, and BlockDAG research. We also worked to get the word out to users, investors, and other people in the cryptocurrency space about the work we were doing so we could build a base of supporters.

The team did a good job deploying the funds in a responsible and balanced way.

It would probably be worthwhile to look at actively hedging, maintaining a reserve, and creating a path for stability and sustainability when the price of ZEN starts to recover at some point in the future.

QThis proves the project is centralized what are you doing to reduce this perception?

We have a team of development and business professionals that are experienced in crafting a vision of what we want to create and doing the difficult work of accomplishing it despite the many obstacles that appear for every new project and organization.

The founders of the Horizen team wrote an initial white paper describing the project. For the first few years, the Treasury funds are assigned to the Zen Blockchain Foundation, also known as the Horizen team, to work to create the vision described in that paper. That’s exactly what we are still in the process of doing.

The team is built out of community members who stepped up and showed they had the ability to contribute effectively. At this point in the time, the team makes decisions in consultation with the community, because the systems for decentralized decision making have not yet been built.

Reducing centralization will be done by the software development of Sidechains, Governance, and Decentralized Node tracking and payment. When all decision about Horizen is done by the community, there should be no centralized aspects of the project left.